How Safe Are Self-Driving Cars?

It is clear that self-driving cars are the future of the automobile industry. Although a fully self-driving vehicle may not be available for another decade or so, current technology allows for autonomous vehicles or those with features that help drivers stay safe while on the road. How much safer will a vehicle that can drive itself be than one operated by a human?

Human Error Is a Leading Cause of Traffic Accidents

Most people consider themselves to be good drivers, and for the most part, human intuition is a valuable skill to have while operating a motor vehicle. However, people also tend to consider themselves better drivers than they actually are, which can lead to mistakes caused by arrogance or a belief that the other person made the mistake in a collision. A human could also drive while impaired by alcohol or drugs, which increases the odds of an accident. This is a scenario that would never occur if a computer is in charge of the car.

Cars Can Be Programmed to Communicate With Each Other

The ultimate goal is to allow self-driving vehicles to communicate with each other on the road. This may eliminate accidents caused by drivers following too closely or drivers who are driving too fast for road conditions. Computers in vehicles may also be able to learn about construction zones or accidents on a given route and avoid those problem spots. This saves time for the passenger while also increasing the odds of a safe trip.

Makers of self-driving cars understand that even one accident involving injury or death to a passenger in one of their vehicles could put a hold on the technology. Therefore, they are designing the cars to obey traffic laws to the letter. When they become more mainstream, it is likely that cars will be programmed to drive at certain speeds or to take other actions by default that will eliminate or reduce the likelihood of a collision. So while the self-driving cars that currently exist are in the testing stage and not yet completely safe, it is something their creators are working on for the near future.

Who Is Liable If an Accident Occurs? 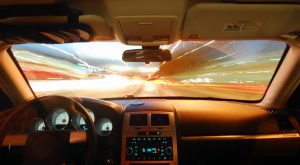 The car companies themselves have said that they will be liable if their vehicles get into an accident. To date, there has only been one accident known to have been caused by a self-driving vehicle. Insurance companies may even be able to use the data generated by these vehicles to customize rates per month, day or even per trip depending on where a person is going or the road and weather conditions at the time the car is in operation.

Self-driving vehicles have a ways to go before they are allowed to be sold commercially and driven on public streets. However, as more testing is done and consumers get used to autonomous features, it is likely that they will be proven to be a safe option for those looking for transportation.

If you’ve recently been in a car accident and are looking for legal representation, look no further. Theisen & Roche, LTD, are the premier accident attorneys in Wheaton, Aurora, Glen Ellyn and the surrounding areas. Fill out our online form for a consultation or call us at (888) 845-7241.