Do You Know Illinois Laws on Cell Phones and Driving? 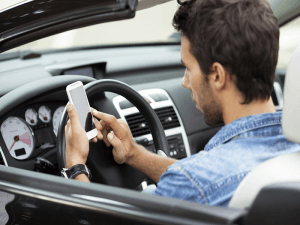 Cell phones may have added convenience to the lives of those living in Illinois and elsewhere, but they haven’t necessarily made the roads safer. For this reason, Illinois has adopted certain cell phone usage laws to help make the roads less dangerous. These laws went into effect January 1, 2014.

While cell phones have made it easy for on the go Illinois residents to keep in touch with friends, family and coworkers, these devices can be a major distraction when driving a car. When a person is focused more on their phone than on driving, accidents can easily occur. Whether a driver is simply talking on the phone or attempting the difficult maneuver of texting while driving, a cell phone can take attention away from driving in a detrimental way. In order to keep the roads safer for all Illinois drivers, Illinois has enacted laws against cell phone usage while driving.

The Laws On Cell Phone Usage And Driving

1. No Texting And Driving. In Illinois, it is illegal to text and drive. Texting and driving is extremely impairing to a driver, and it is for this reason that texting and driving is totally against the law in Illinois. There are exceptions to this rule, though. If a driver is reporting an emergency situation, then it is okay to text. It is also okay to text if a driver is parked on the side of the road, or parked in neutral due to a traffic obstruction.

2. Drivers Must Use A Hands-Free Device. In Illinois, all drivers must use a hands-free device if they want to talk on the phone while driving. Hands-free devices that are permitted include Bluetooth, speakerphones and headsets. In addition, cell phones cannot be used by new drivers, or in school or construction zones.

In Illinois, violation of cell phone usage laws is considered a primary offense. What this means is that a law enforcement officer can pull a driver over simply because the officer witnessed the driver using a cell phone. Along with a citation, drivers committing this offense will have to pay a fine that starts at $75. Depending on the area in which the offense takes place, this fine can be much higher. If a driver is caught using a cell phone in a construction area or a school zone, the offender can expect to pay a fine that can cost hundreds of dollars.

If you need legal assistance, please contact us immediately for a complimentary case evaluation.

I never expected to get a consultation with a partner when I walked into your office. I want to thank you for giving me the opportunity to present my case. I appreciate the pragmatic, honest advice you generously extended. I never realized the extent of financial commitment that’s necessary to present a case given the odds against winning. It must be gratifying to obtain some justice and I wish you this continued moral satisfaction.

I want to write on behalf of my own landscape crew. Jim Roche went far beyond the call of duty in assisting one of our part-time helpers. His assistance not only relieved Raul and his family, but gave the other workers a great sense of affirmation for being heard and knowing that there are other people that really are watching out for the working poor. Thank you for all your help in resolving this matter. This meant a great deal.

Thank you again for your kindness and hard work on our behalf. You are an asset to your profession and an angel to us.

Bob and Joann B.