According to the Occupational Health Safety Administration (OSHA), there were 4,679 work-related fatalities in 2014, the most recent year for which we have statistics. Fatal injuries involving employees of construction contractors consisted of 17 percent of those fatalities. Four of the most common causes of construction site injuries are outlined in the paragraphs below. 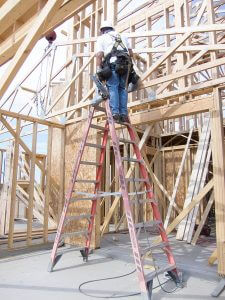 Workers involved in construction risk falling from ladders, scaffolds, cranes and other equipment that enables them to work at different heights. About 33 percent of all fall-related injuries and fatalities involve falls from roofs. Roofers and steelworkers are most often injured or killed from roof falls. About 36 percent of all construction-related deaths in the 2014 figures were from falls.

Being Struck by Objects

Tools, materials and other objects that aren’t properly secured and used at heights cause risks to construction workers below when they fall. Those risks are one of the primary reasons for hard hats. Workers might also get struck by heavy equipment like cranes or bulldozers. In the Chicago suburb of Des Plaines, one construction worker was recently killed, and three others were injured, when a massive 45-ton road beam that was 180 feet long fell from a crane. About 10 percent of all deaths from construction site injuries result from being struck by an object.

It’s quite common for construction sites to work with or around electrical hazards on a job site. Sometimes the electrical source is still a work in progress. Electrical hazards must be identified, and due care and caution needs to be used by employers and employees. About 9 percent of all construction accident deaths are from electrocution.

Being Caught Between Objects

Our attorneys can help you or your family get compensation for a construction accident an injury if you were hurt due to negligence. You can call us 24/7 or fill out our online form for a consultation.

Eternally grateful for taking my case. He gave me back a life.

Thank you for all you did for me as my lawyer. You were a good friend through the whole ordeal and always made me feel confident about what I was pursuing. Your staff is also very wonderful – they were always helpful and would calm my fears.

Chris Theisen, Jim Roche, Kim Mazuc and everyone at Theisen & Roche, Law Firm showed my family and I genuine concern & professionalism while we were dealing with one of the worse times in our lives. Chris and Jim have a very unique way of being straight forward, while creating clear and to the point expectations. They always kept me in the loop and expressed genuine compassion and patience when things got tough. Theisen & Roche secured fantastic results for us. I wouldn’t go anywhere else. I’…